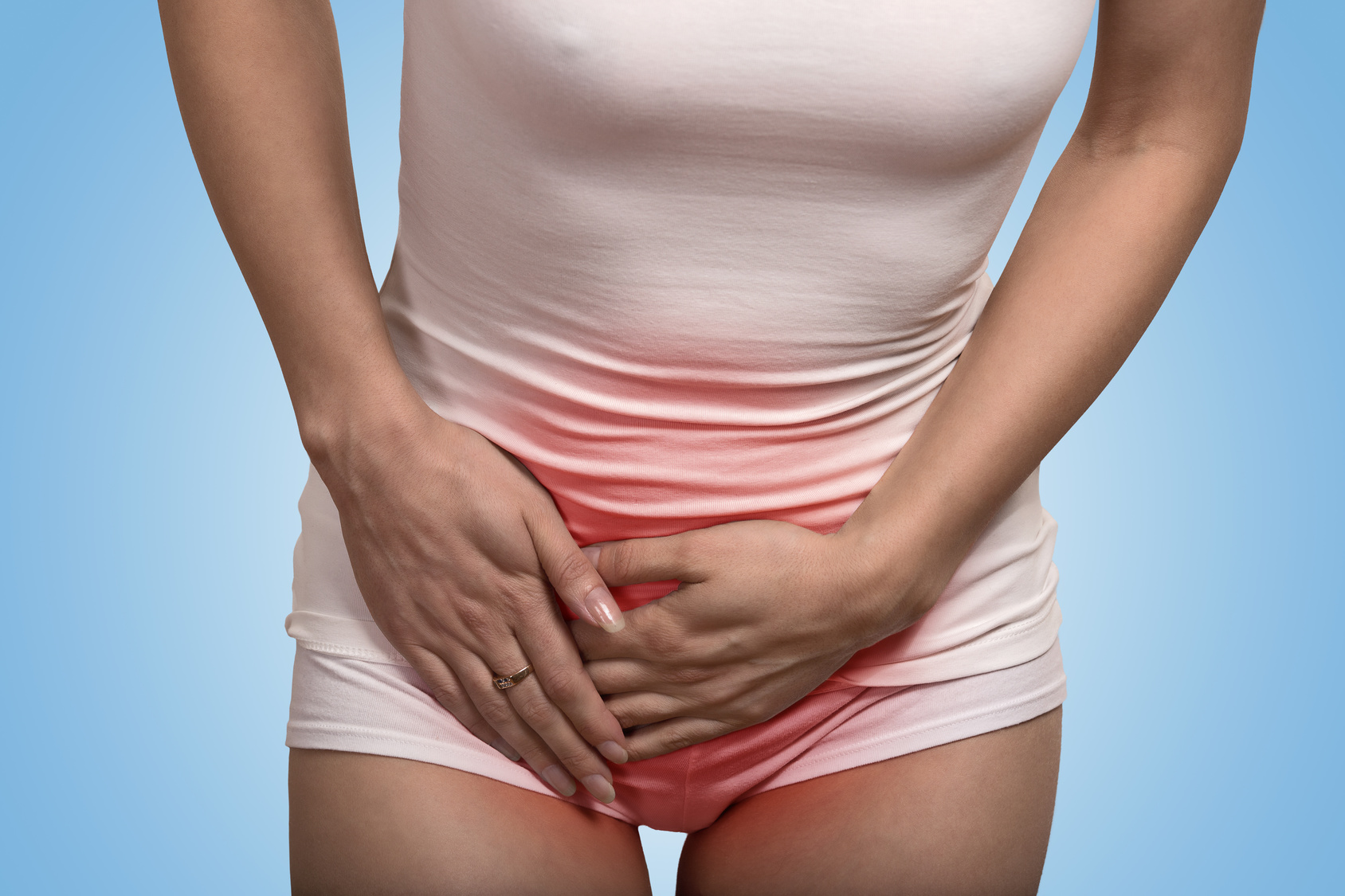 Chronic pelvic pain is a common complaint in women. When the cause of pelvic pain is not successfully diagnosed, attention should be given to the bladder as the possible source. Interstitial Cystitis (or “I.C.”) is a bladder condition that can present as chronic pelvic pain. The classic symptoms of women with I.C. are frequent urination, bladder urgency and pelvic pain. (15% of women with interstitial cystitis will have very little or an absence of pelvic pain.) The pain is usually felt just above the pubic bone, but it may be felt in several other areas, including the vagina, lower back, front of the thighs or the lower abdominal area.

Having to urinate frequently at night is a very common symptom. The normal bladder will hold 12 to 16 ounces of urine before the sensation to urinate occurs. Women normally urinate four to eight times in 24 hours, depending on their fluid intake. In those women with interstitial cystitis the need to urinate will occur up to sixteen times a day. As their bladder fills with just a small amount of urine the pressure to urinate becomes increasingly painful. After urinating their pain may decrease, but still persist to some degree. Intercourse will cause their symptoms to increase in 75% of sexually active females with interstitial cystitis.

Many women treated for post-coital bladder infections may actually have interstitial cystitis. While adult women may experience a recurrence of their symptoms during or after sexual intercourse, younger women, age 17- 20, will sometimes have a delay for a day or two after intercourse. Interstitial cystitis symptoms may also be related to the menstrual cycle and commonly appear a week before it begins. Certain foods can cause a flare of symptoms in some patients, especially foods that have a very high potassium content. Symptom flares may also be related to allergies. Patients who may have been in remission for many months can experience a flare of symptoms during allergy season. Additionally, emotional and physical stress appear to contribute to flares in certain women.

The Cause of Interstitial Cystitis

There are many theories proposed as to what is the underlying cause and pathology of interstitial cystitis. People have proposed an immunologic mechanism as well as defects in bladder wall cell to cell connections in the bladder mucosa. Infectious and inflammatory etiologies have also been postulated. Most people believe a major factor in the cause of interstitial cystitis is a defect in the amount of a protective mucous that the bladder wall cells produce. Urine is irritating when it comes in direct contact with the cells of the bladder wall and the bladder produces a mucous made of protein to help protect the bladder cells from coming in direct contact with it. Women with interstitial cystitis are felt to have a defect in the production of this protective mucous layer. Evaluation and Diagnosis After other disease processes have been excluded, the “gold standard” examination to confirm the diagnosis of IC is cystoscopy with hydro distention under general or regional anesthesia. This procedure involves slowly stretching the bladder with fluid, thereby allowing your physician to see changes that are typical of IC. Some of these changes include the presence of glomerulations (pinpoint hemorrhages that occur on the bladder wall, and are seen in the majority of IC 2 patients), or Hunner’s ulcers (or patches), which may be present in a small minority. 10% of patients who present with symptoms of IC have neither glomerulations nor Hunner’s ulcers upon cystoscopy with hydro distention. However, these patients may have IC, and need to receive treatment for their symptoms. Office cystoscopy may often establish the diagnosis of I.C. Sometimes cystoscopy with hydro distention is performed as an outpatient procedure. This is because the bladder needs to be filled to a high pressure in order to see the typical abnormalities of IC, a pressure that would cause significant pain to an IC patient (or even a patient who does not have IC), who was not anesthetized.

After the Procedure: After the cystoscopy with hydro distention procedure, you will be moved to a recovery room. As the anesthesia begins to wear off, you may experience pelvic pressure and/or pain. You will be required to urinate before being discharged from the hospital. Typically, your first voids after this procedure can be painful, and your urine may contain blood. A catheter is not commonly left in place after this procedure, as IC patients tend to experience pain with prolonged catheterization. Remember to ask for pain-relieving medications upon being discharged from the hospital. Oral pain-reducing medications can be prescribed to help alleviate any discomfort you may experience following the procedure. You may experience some discomfort for several weeks, including pelvic pain and/or urethral burning. Your physician will schedule a follow-up appointment with you to discuss various IC treatment options. If bladder instillations are being considered as a possible treatment, they should not be initiated until your bladder has had time to recover from the cystoscopy with hydro distention, usually 3 to 4 after the procedure.

If the above tests are equivocal, an additional test that can be useful in diagnosing interstitial cystitis is called the Potassium Installation Test. What the test involves is instilling the bladder first 3 with sterile water. The patient then voids and a test solution of sterile water with some potassium is instilled and we ask the patient if her symptoms flare with the instillation of the potassium solution as compared to the water only solution. In patients with interstitial cystitis that have a decrease in the protective mucous layer of the bladder wall, the potassium will irritate the nerve fibers within the bladder wall and cause pain and a strong urge to void.

A diet low in acidic foods, and avoiding beverages such as coffee, tea, carbonated and/or alcoholic drinks, may be helpful in reducing IC symptoms. Prelief®, an over-the-counter dietary supplement, may help IC patients better tolerate acidic foods and beverages. Self-help measures include stress-reduction techniques, pelvic floor relaxation exercises, biofeedback, and bladder-retraining (once pain is under control). The mainstay of treatment of patients with interstitial cystitis is to recoat the bladder with protective protein that it is deficient in making on its own. This is achieved with simple office instillations of solutions that contain protein. In addition, a local anesthetic solution and at times a steroid are added to the instillation to help in achieving quick and maximal benefits. A small catheter is placed in the bladder through the urethra and the treating solution is instilled through this catheter and then the catheter is removed. Instillations are usually begun on a weekly basis and then spaced out as the patient responds to therapy. When the patient is no longer symptomatic, instillations can be completely stopped and then restarted when symptoms recur.

Watching one’s diet very carefully is a very important part of therapy as well. Avoiding foods that are high in salt and potassium can be helpful in minimizing symptoms. Avoiding alcoholic beverages, caffeinated drinks, acidic and spicy foods, canned foods that contain nitrates or nitrites is helpful. I recommend for everyone to keep a diet diary and to note any foods that flare their symptoms and then make an effort to avoid those foods.

There is an oral medication called Elmiron, which is used to augment the protective mucous layer of the bladder wall. Elmiron is found to be helpful in 30-50% of patients. However, it may take 6-12 weeks before a significant effect is seen with this medication. In some patients over distending the bladder with fluid while the patient is under anesthesia is helpful. This is called hydro distension. The initial response after such a distention is actually increased pain for a few days to a week followed by resolution of symptoms.

Interstitial cystitis is a chronic inflammatory condition of the bladder wall. It must be considered in any patient with chronic pelvic pain. Patients with chronic pelvic pain who have had gynecologic evaluations, including ultrasounds and laparoscopies without a definite diagnosis and persist with pain should be evaluated to see if interstitial cystitis is the cause of their pain. Treatment for the vast majority of patients is relatively easy and highly effective. If you think you may be suffering from any of the symptoms of interstitial cystitis, please call our office and make an appointment to be evaluated.